The answer is “both.” New products originate when new product design and production technology come together.

The drive motor is an important component that impacts the driving performance of a vehicle. The drive motor is active in electric driving modes, such as hybrid driving and EV driving. In the 1-motor hybrid transmission, the drive motor must be mounted in the same space that contained the AT torque converter* component used in gasoline-powered vehicles.

*  A part that transmits engine power to the transmission gear

Mounting a drive motor about 10 cm wide in a narrow space within a 1-motor hybrid transmission is the first challenge in the production technology presented here.

The role of the motor

A motor is a component that generates power used to move something by exerting rotational force when electric power is supplied. The interior consists of a series of electrical wires called “coils” through which current is passed creating rotational force, which increases the output of the motor, but also creates problems with the mounting space and weight of the motor,

To resolve this issue, an innovative method is required to wrap wires around the motor at high density, which  reduces the  size while still ensuring high output.

To reduce the bulk of the motor, Aisin’s development team focused on the coil end (below), which is not related to the performance of the motor. Reducing the size of an essential part

In the conventional flow of product development, the Design Department is in charge of product design (shape), while the Production Technology Department manages process design and construction methods. This time, however, the members in charge of production technology were involved in the development process from the early stages of product design, and the two teams worked together to reduce the size of the coil end, resulting in a new structural plan that followed the construction method from the design stage.

Ultimately, a method of bending the coil in the circumferential direction by reducing the number of welding points was adopted to prevent welding points from interfering with each other and successfully downsizing the coil end (above).

To get to this point we reviewed the coil shape and assembly method from scratch and succeeded in reducing the thickness of the coil end by more than 40% compared to the conventional product.

In order to mass-produce and release this innovation to key markets, new processing equipment was developed in-house. Subsequently, a series of efforts to develop this new drive motor resulted in the successful launch of the 1-motor hybrid transmission. Automatic transmissions (AT), the mainstay of gasoline-powered vehicles - were produced in large numbers because a single product is used in a variety of vehicle models, and once it was adopted, it took a long time to switch to the next new product. A large-scale production line that aims to reduce costs by mass production was suitable for the ATs, but electric units installed in electric vehicles are produced in small quantities and fluctuate in number, so they must be produced efficiently.

Another challenge in Aisin’s production technology evolution is the realization of the mixed-flow production system for electric units, which increases efficiency by producing multiple types of products on a single line.

Aisin manufactures three models of eAxle - 150 kW and 80 kW for front wheels and 80 kW for rear wheels -which are the drive source for BEVs. What made it possible to produce eAxle on a single line, rather than on multiple lines, was the combination of two production lines: a fully automated “common platform,” which aggregates common processes for each model, and a “variation-response line,” which enables different responses for each model (above). 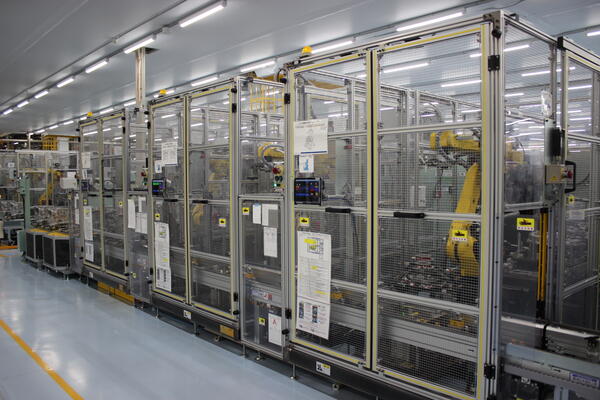 For this common platform, we have a newly introduced assembly machine that can automatically change the “tool” attached to the tip of the robot arm. Previously, it was necessary to set the robot arm for each tool. By changing the arm tip tool, one robot can perform multiple processes, enabling mixed-flow production and reducing costs by compacting the production line and reducing the number of robots required. A “cell” that assembles different types of electric units in order

In the variation-response line, we assemble different types of eAxle that are transported one after another in one workshop, called a “cell,” where necessary parts are installed in some types of eAxle.  Once the work is complete, the product is returned to the common platform. Upon our likely expansion beyond these three models, we will be able to quickly switch the line to handle variations.

In addition to these initiatives, we achieved a 30% reduction in CO2 emissions from production lines (compared to conventional lines) by implementing a number of new production technologies, including the introduction of the Automatic Guided Vehicle (AGV) to transport products and parts within the plant, and the use of IoT to visualize energy.

These efforts to simplify the production process and increase efficiency are not only environmentally friendly, but they also simplify the set up process of production lines at overseas plants. Aisin plans to produce electric units in various regions in the future so that more customers around the world can enjoy eco-friendly vehicles. Aisin’s manufacturing prowess, matched seamlessly with technological development, is the driving force behind products that inspire mobility. The entire AISIN Group will continue to supply electric units for a variety of electric vehicles to customers around the world, contributing to the realization of carbon neutrality.